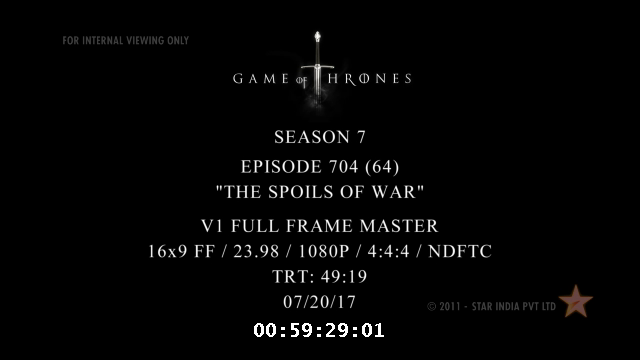 After all the buzz regarding HBO’s compromised servers, Finally the Game of Thrones Season 7 Episode 4 named ‘The Spoils of War’ is leaked prior to original TV Broadcast of August 6th.

According to a report by NDTV, a spokesperson from Star India gave the statement saying ‘This confirms the compromise of episode 4 of Game of Thrones Season 7, earlier this afternoon,’

Read Also: Where To Watch Game of Thrones Online For Free In India

He further added ‘We take this breach very seriously and have immediately initiated forensic investigations at our and the technology partner’s end to swiftly determine the cause. This is a grave issue and we are taking appropriate legal remedial action.’.

This is not the first time for HBO, they have experienced the same sort of leaked GOT scenario back in Season 5 in the year 2015 where screeners sent to press were leaked online.

Read Also: How To Watch Game of Thrones Season 7 In India Free

I know you must have probably heard about this update a while ago, so here we will provide you the correct destination where you can watch the leaked episode 4 in good quality.

the procedure is pretty similar to above, just search for the term ‘Game of Thrones’ in the search bar > click on the poster link > here you will find out the season wise breakdown of episodes with the name > click on the season 7th with episode named The Spoils of War (EP7)  link and play the video (the video might not work after loading, so you just need to click on the red bar which says ‘The video keeps buffering? Click here for a different version.’) > you will get to see a video with thumbnail > click on the play icon and its done.

This one is the best streaming portal to watch the latest episodes of Games of Thrones Season 7 in best possible quality at free of cost, unlike other poor streaming sites. Here you just need to visit the http://chillnflix.to/ > search for the game of thrones in the ‘search bar’ > it will show up the GOT Season 7 with episode named The Spoils of War (EP7)  link > simply click on it and play the episodes.