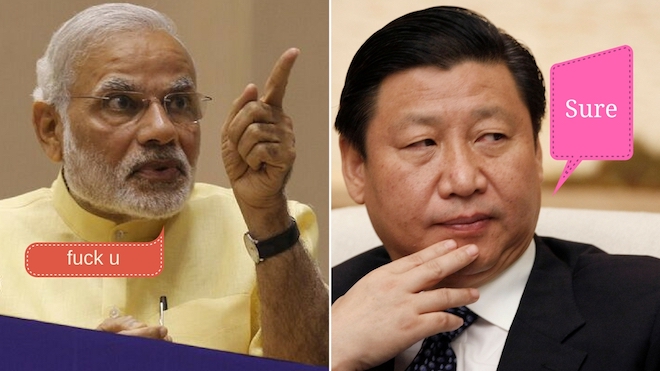 When you compare two biggest Asian countries (India and China) on numerous parameters, anyone can easily conclude the easy victory of China as they’ve got best in class manufacturing facilities, technology advancement, military force, and no one is denying the fact.

But there are significant areas where India is still ahead of China and it seems Chinese people can never surpass the India in these fields.

Here are the Top 5 Areas Where China Can Never Beat India;

Many of the people don’t aware of this fact, but that’s certainly a truthful aspect when it comes to the financial sector of India and China. When it comes to reforms in economic and financial markets, India is years ahead of Chinese folks. Also, India’s bond market known as one of the most liquid in Asia which is greatly regulated by Reserve Bank of India. Even for the equity market, India is considered as well maintained a market on global parameters.

This is another area where India is far ahead of China. Despite having a lower population than China, India still holds the youngest population mark and is set to become the youngest country by 2020 with expected median individual will 29 years.

Believe it or not, Yoga has become a trend across the globe and International day of Yoga is the true example of its prominence among overseas nations. And we all know that yoga itself is originated from ancient India.

Coming to the Ayurveda part, It is a system of medicine with historical roots in the Indian subcontinent. And now it is being used as an alternative to modern day medical science across the world. Here we can say that; China can never gain the expertise like India in these two areas.

Consider it or not, The Republic of India still is and will be the largest in the world with a population of over 1.3 Billion. The Constitution of India is driven by these five principles; that India is a sovereign, socialist, secular, democratic, and republic country.

Even after numerous democratic reform, China still is the communist country and can never surpass India as world’s largest democratic nation.

When it comes to pharmaceutical products, it will scare the shit of any nation to even thought of beating India. India has consistently outperformed China as far as Pharmaceutical exports to Latin America in the past five years is concerned. In figures; alone in 2016 India exported products worth $651 million to Latin America, as compared to China’s $404 million-worth exports.