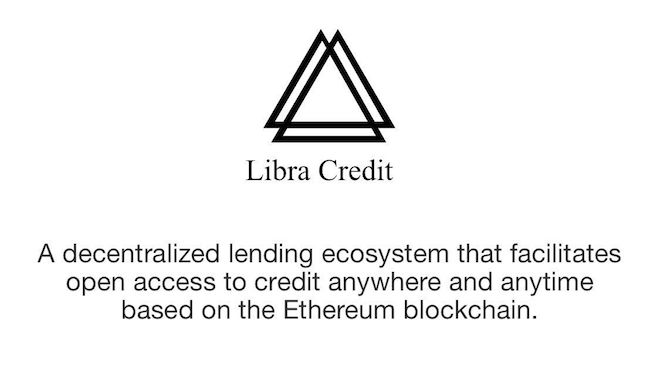 Libra Credit is offering a decentralized lending Ethereum-based ecosystem that helps users get open access to credit anywhere and anytime.

Libra Credit plans to charge a fixed 8% annual interest rate charged by Libra Credit, which is party enabled by its partnerships with traditional finance institutions. The rate is competitive with that of other peer-to-peer lending platforms such as Lending Club and Salt, but isn’t tied to the availability of a peer match.

Libra Credit has a few synergistic partnerships lined up with cryptocurrency exchanges, stable coin providers such as MakerDao, third-party identity verification data providers such as uPort, and licensed financial institutions.

Co-founder Lu Hua cut his teeth in the fin-tech payments space, spending several years at PayPal in leadership and managerial positions before taking on a CEO role at a leading digital credit service company called moKredit in 2011. With investments from Sequoia Capital, Bertelsmann Asia Fund, and Ventech China, moKredit scaled to over 30 million users using its AI-based credit computation and risk management technologies.

During his time at moKredit, Lu Hua found that it was exceptionally difficult to build an international credit history because of the myriad of credit reporting systems by each country.

Co-founder Dan Schatt also served a variety of leadership and managerial roles.   During Schatt’s tenure as the GM of Financial Innovations at PayPal, he was able to build productive partnerships with a variety of financial institutions.

In 2017, Hua and Schatt jumped into blockchain and founded Libra Credit to help evolve the current limited methods of building credit internationally.

“It’s the first time in human history that there are some universally acceptable digital assets like Bitcoin and Ethereum,” Hua commented. “We believe blockchain is the way to go.”

Libra Credit, a platform that enables anyone to borrow money from Libra Credit provided they have digital assets, rests its business model on the rapidly growing population of cryptocurrency holders.

We are passionate about financial inclusion. You shouldn’t have to pay more money because of where you were born. This is a global issue that blockchain can address. Digital assets can be purchased by anyone, anywhere, as long as you have access to the Internet. That’s really the power.” Dan Schatt commented.

It seems that Libra Credit is aiming to position itself as an entity with the best of both worlds, the flexibility and decentralization of a digital-asset backed lending platform and that of a traditional finance and less volatile institution.

“We believe that it’s necessary to provide a lending platform within the crypto space and collaborate with traditional financial intuitions,” Hua said. “It’s harder to build at the beginning compared to peer-to-peer platforms, but it’s more promising in the long term.”

“We see the future and we see it happening,” Schatt said. “Libra Credit may be one of the very first products that gives people a very practical and tangible taste of how blockchain can equip and improve their day-to-day life.”

While only time will tell how the inherent volatility that has become so deeply linked with the cryptocurrency industry will impact Libra Credit’s business model, it certainly doesn’t hurt that the company is developing an AI-based credit assessment framework to mitigate risks on the lending side.