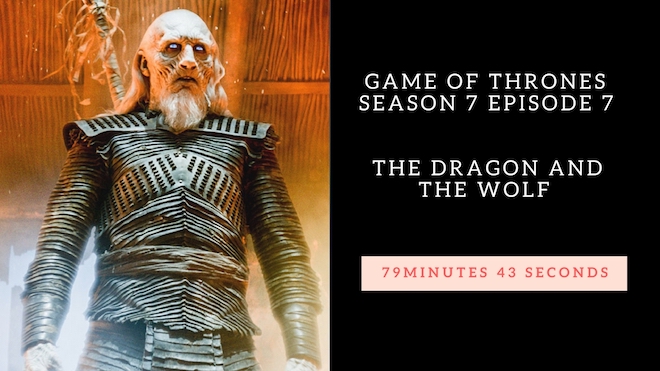 After seeing the Episode 6 ‘Beyond The Wall,’ all Game of Thrones fans is eagerly waiting for the release of Episode 7 on Sunday (Though unethical leak will also work for fans). Also, the hackers have already threatened HBO network about the leak of Season finale ‘Episode 7’.

That said, here is a treat for all those curious GOT fans out there, we’ve come up with a surprising fact about the episode 7 of the season.

HBO has officially revealed the title for the Episode 7 named ‘The Dragon and The Wolf, ‘ and also the episode is expected to have run time of 79 minutes and 43 seconds, the longest episode in the history of Game of Thrones. Those who don’t know, ‘Beyond The Wall’ is the second longest episode of the entire series.

If we look at the released preview for Episode 7 with very less narration, then we could assume that the principal characters of the show that include Cersei, Jaime, Tyrion, Jon and Dany and other characters are going to attend the initiatory meet to kill The Night King and its dead army.

Now if we look at the revealed five words title ‘The Dragon and The Wolf’ of Episode 7 then we can assume that it signifies the pivotal relationship between Daenerys Targaryen (the dragon) and Jon Snow (the wolf). There is also a theory which suggests that Jon originally belongs to the Targaryens and he is believed to be the son Rhaegar Targaryen and Lyanna Stark.

Well, the season finale is expected to be the most-watched GOT episode in the history of Game of Thrones.