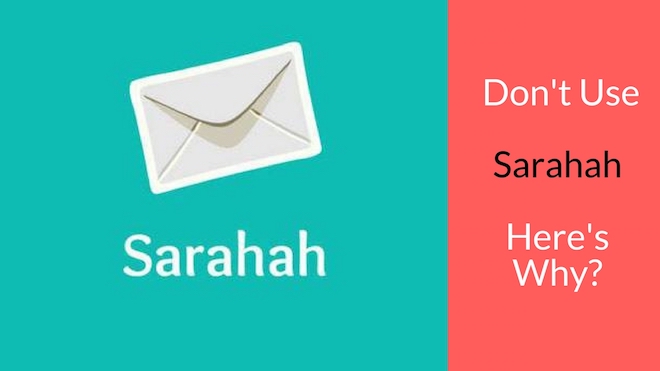 You must have come across the app called ‘Sarahah‘ that is outperforming giants like Facebook, Instagram, Snapchat, and YouTube on the app store. It has become an internet sensation overnight and is already used by millions of people across the globe. But the sad part is that; people are blindly using the app without considering the consequences or negatives of the app.

To give you a proper insight, we’ve compiled a list of 6 strong reasons why you should never use sarahah app. And we’ve prepared the article on the both technical and moral grounds. So that you could think twice before using the app.

6. There is a question mark? on Privacy and Anonymity of Users

See, that’s the huge issue when it comes to using products from not so reliable sources or new players in the market. And Sarahah is one of them, and even in past, the app has received several threats from hackers about revealing the identity of senders.

Let’s say, Sarahah is a secured platform but do you really trust those security aspects. Come on, It’s 2017 and we can bet on this; HBO, a billion dollar company must be having hundred times secured system than this infant, despite that they failed to combat the Game of Thrones Season 7 Episode 4 leak. Hope you understood because a wise can read between the lines.

5. It is not a revolutionary stuff, and nothing new about Sarahah

The internet has already seen the likes of ASKfm, Whisper, Yik Yak, and Secret. Those anonymous messaging sites and app also did more or less same thing like Sarahah. So there is no point of getting excited about the app as there is no such innovation or revolutionary element present.

Consider it or not, the future of Sarahah seems unsustainable as people are already disliking the whole mechanism of anonymity. And millions of people are thrashing over the app for its nature of ‘breeding groud for hate’.

I don’t respect anonymity, if you lack the courage to speak your mind please just die in silence #sarahah

I wonder how dumb it feels to be like 18+ & fish for anonymous compliments/hate mail…. #Sarahah

3. It is a breeding ground for hate

Though it is an app for sending and receiving feedback from friends and co-workers anonymously and it mainly programmed to help you in discovering your strengths and weaknesses “by receiving honest feedback from your employees and your friends in a private manner.” But one should also need to aware of the human nature, as people have a tendency to bully others for no reason since ages and when you get a weapon of anonymity then it really becomes destructive. Therefore, we don’t recommend using Sarahah unless you wish to bullied for no reason.

2. Even lawyers are not confident about using Sarahah

You can call yourself a geeky, social media enthusiast, or someone who likes to explore doubtful stuff online. But you can’t be as intelligent as cyber law experts when it comes to privacy factors in these viral apps.

Recently Inverse.com called Jonathan Turco, a partner at Klein Moynihan Turco LLP, a New York law firm that specializes in digital privacy law and internet marketing law about Sarahah’s privacy policy and asked him to give his insight.

Turco says, is that Sarahah is basically a complete unknown. Created by Saudi programmer Zain al-Abidin Tawfiq, the app launched in February and first gained a following in the Middle East. But it’s not made by a major company. It’s just a random app that went viral.

“Any time you submit data to a website, they can do whatever they want with it,” Turco says. “It might not be legal, but just because the privacy policy says that your data is protected doesn’t mean that the other party has to respect their side of the agreement.”

1. Those Hate Messages Can lead to low self-esteem among teenagers and depression for working-professionals

Suppose, there is a 15-year old child who is already not so confident about his personality. Then he publishes his Sarahah link on social networks for receiving honest feedback from his friends and classmates. Then he suddenly realized that his account is filled with hate and bullying messages. Now you can imagine yourself his mental state after reading those messages considering he is already facing low self-esteem issues.

Now let’s assume the second scenario, where a working-professional has published his or her sarahah link among the office co-workers for receiving honest feedback from their employees. Then, he/she starts to figure out that the account is filled with negative and detrimental messages. It can become even worse if the victim is a female as it can lead to messages from body shaming to abusive stuff. Now imagine, Will it be possible for him or her to work with those colleagues.