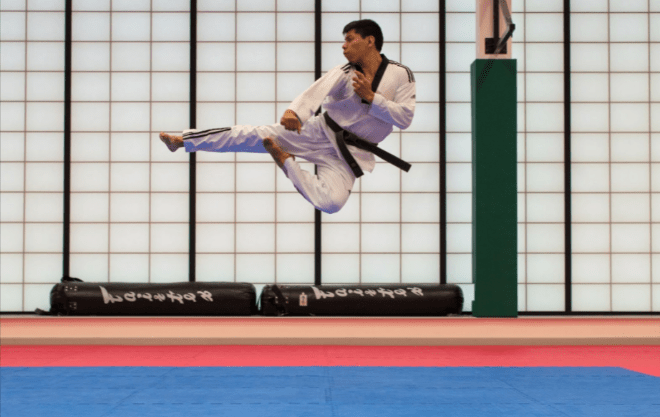 1. Taekwondo is a modern martial art with ancient origins

Compared to other martial arts, taekwondo is quite young. Its origins date back to around 1945 when new martial arts schools called “kwans” opened in South Korea’s capital, Seoul. The kwans were established by Korean martial arts practitioners, some of whom had been in Japan during that country’s occupation of Korea in WWII.

Traditional Japanese martial arts – including kendo, judo, and karate – were brought into the same arena as traditional Chinese and Korean martial arts that had been practiced in Korea for centuries. The new form of self-defense developed in these kwans was a blend of the ancient practices designed to become a unified martial art for Korea.

2. The name is as literal as you can get

Just as taekwondo is a blend of martial arts forms, the name is a blend of Chinese and Korean words. “Tae” relates to feet, jumping, and kicking, “kwon” relates to hands and fist, and “do” translates to “the way” or “the art.” When combined into the word “taekwondo,” you get something along the lines of “the way of the hand and foot” or less elegantly, “the art of punching and kicking.” It doesn’t get any more literal than that!

3. Taekwondo made it into the Olympics

Taekwondo first made an appearance at the Olympics in 1988. However, it wasn’t a competitive sport at this time. Rather, it was included on a demonstration basis in the Seoul Olympics. Twelve years later, Sydney was the first Olympic city to welcome taekwondo as an official competitive sport. In 2010, taekwondo was added to the Commonwealth Games.

Though it was designed to unite various martial arts into a single Korean form, as taekwondo spread, it began to evolve into distinct styles. As time goes on, we can expect more and more hybrids and evolutions to occur within taekwondo. You’ll now find traditional taekwondo, Songahm-style, Jhoon Rhee-style, Kukki-style, and plenty of other hybrid forms like the Scandinavian Han Moo Do. Developed in Finland, Han Moo Do combines elements of taekwondo, hoi jeon moo sool, and hapkido.

5. There’s a science to taekwondo

The International taekwondo Federation was founded by Korean military General Choi Hong Hi in the 1950s. He drew on physics for the development of many of the principles of the martial art form. This was how he determined that, when striking, speed and agility are more important than body size. Choi formalized a theory of power that is still used by many taekwondo practitioners to this day.

In taekwondo, you will learn to bring as much muscle-power as possible into every strike while concentrating that force into the smallest area of impact possible. You’ll also learn to maintain a strong center of balance through every strike and technique. These and other principles are drawn from Choi’s theory of power which was, in turn, drawn from physics.

While learning about the history of taekwondo is certainly fascinating, nothing beats donning your dobok (the traditional taekwondo uniform), stepping onto the mat, and learning the techniques for yourself.

Figure Skates: All you need to Know