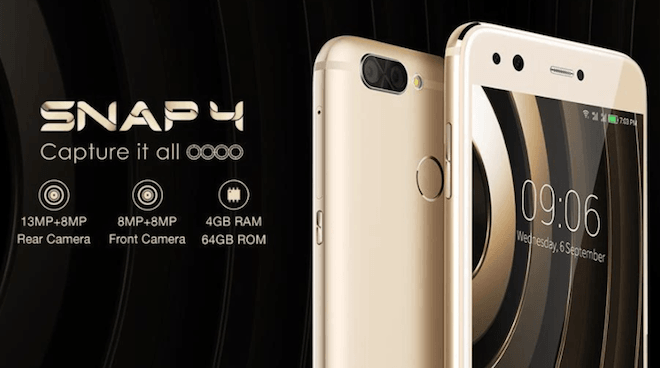 The smartphone manufacturer Infocus India, on 13th September, launched its two new smartphones in the Indian market. The company released the Turbo 5 Plus – which is an improved version of Turbo 5 launched in June and the fresh Snap 4 – a camera-centric device.

Those who don’t know, Infocus Corporation is the United States based company, founded in 1986, it is a leading innovator in projection and display technologies. The brand is well known for offering low price smartphone devices with significant specifications and the company manufactures the smartphones in collaboration with Foxconn. Talking about The Snap 4, It is a photography-centric 4 camera smartphone device by Infocus that is equipped with a dual rear camera setup of 80-degrees 13 Megapixel and 120-degree wide-angle 8 Megapixel configuration. Apart from that, these two lenses work in sync to produce better portraits. It has also got a dual LED flash module next to the camera lenses. For selfie lovers, it features a dual 8-megapixel camera setup that is quite advanced considering the price point at which Snap 4 is available.  The front shooters also come with customised beauty modes for better-looking pictures.

Here are some of the shots taken from The Snap 4’s dual rear camera. The phone is quite capable of producing crisp and clear pictures. The Snap 4 is good at capturing the in-depth details of the objects. The colors look vibrant and sharp in the picture. As far as other specs are concerned, the Snap 4 is powered by a 64-bit octa-core MediaTek MT6750N processor (4 Cortex-A53 cores clocked at 1.5GHz + 4 other unspecified cores clocked at 1GHz), paired with 4GB of RAM and Mali-T860 GPU. It weighs 162 gram and comes with a 5.2-inch HD OnCell IPS display with 720×1280 pixels resolution that runs Android 7.0 nougat. For storage, it has 64GB of inbuilt storage that can also be expanded up to 128 GB via microSD card. The device is backed by 3000mAh battery and sensors such as fingerprint scanner. Considering the group of features and the price at which the device is available, you must go for Snap 4 if your budget falls under 15000 as Snap 4 is one of the best smartphones under 15000 price range. On the other side, Turbo 5 Plus, the device features a 5.5-inch IPS HD display with a resolution of 720×1280 pixels. It is powered by an octa-core MediaTek MT6750 SoC alongside with 3GB of RAM, running Android 7.0 Nougat. On storage part, it has got 32GB of internal storage that can be expandable up to 64GB via microSD card. For photography, it has a dual rear camera of 13 Megapixel and 5 Megapixel with digital zoom, and for the front, it has got 5 Megapixel shooter for clear and sharp pictures.

That said, the main highlight of the device is its humongous 4950mAh battery that the company claims can last up to 34 days on standby. Apart from that, the device also comes with dual-sim functionality and other standard connectivity options like Bluetooth, Wi-Fi, USB OTG, Micro-USB, GPS, apart from 4G VoLTE. Looking at the specs of the device, we can conclude that Turbo 5 Plus is definitely ahead of its predecessor Turbo 5. And those who are looking for a smartphone under a low budget then you should surely try Turbo 5 Plus as it is one of the finest smartphones under 10000. It will start selling on 21st September  12 AM onwards only on Amazon for Rs. 8,999/- only.