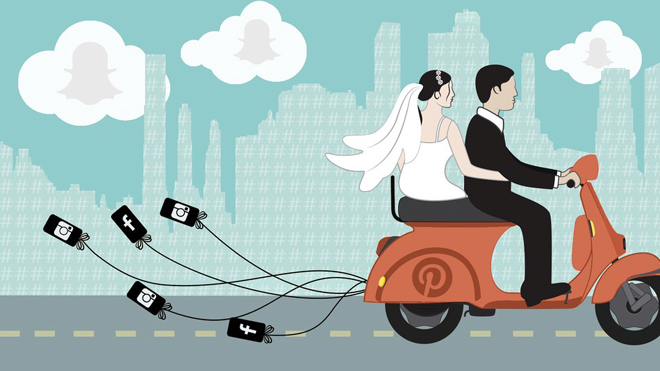 Being a tech blogger, I have reviewed numerous smartphones and apps but what I genuinely liked about current mobile phone technology is its ability to perform a range of tasks in a manner that is unpredictable to a humanitarian brain.

For instance, In India, if someone informs you that his smartphone has helped them in finding their better half then it must come across to you as overwhelming considering in a territory like India; where finding an alliance and marrying them is harder than establishing your own textile factory.

But in the current scenario, smartphone technology is actually playing the role of both; a matchmaker as well as of a wedding planner. This blog post is focusing on how smartphones have changed Indian wedding tradition, with a comic essence. Don’t worry, this is a deeply #technocrats post, having an in-depth significance of smartphone technology.

In Quest of Groom and Bride, Then and Now

Then: Almost twelve years ago when my sister-in-law’s family received a matrimonial proposal from my cousin-brother’s family, her father invited the would-be groom to live in his house for a week, to get cognizant of this young man before giving any consent. Even though the bride’s father knew the groom’s family pretty well, he still wanted to have a closer look when he was going to decide on something so vital, i.e. his daughter’s marriage.

Now: One year back my cousin-sister finished her undergrad and one day my siter got a call from her friend with respect to her wedding invitation. The anxious sister asked her friend, what factors led her to decide to get married. Her friend replied, “He works for an SEO company in the US, I met him on my smartphone’s Tinder app and dated him for a month or so, I found him very straightforward and honest…”. My sister started throwing her head over the wall listening to this statement.

In Search of Banquet Hall & Tent House, Then and Now

Then: Remember those days when the bride’s father always worried about having a banquet hall booked for his daughter’s wedding, and used to do pre-booking for all the wedding-related things months before the wedding day, just to avoid last-minute turmoil that arises due to engaged wedding season, especially in North India.

Now: But today’s Indian wedding scenario is way different than what we use to witness in the early 2000s. Here I’m putting a live example, a few months back one of my cousin sisters (I have many) Shikha got married, and trust me, the arrangements were more than just wonderful. After the wedding, my mother told bride’s father (uncle), and said, “Bhai Sahab wedding arrangements were fabulous, from the banquet hall to food, each and every element was amazing. But how did you manage to do everything all alone.” Then he replied, “Behenji Nothing, Shikha told me about an android app called ‘UrbanClap,’ a very trusted household service provider, from there, I booked all wedding-related stuff that includes a wedding planner, photographer, caterers, live band, wedding cards and so on.”

Again, my mother got stunned.

No More “Then and Now”, Let’s Be Specific!

Send Wedding Invitation at 4G Speed, Save Your Time, Money and Effort

Say bye to those days when you had to order the bundles of wedding cards for invitation purposes. In this era of a 4G network, you don’t need to bear a headache for such basic things. Now you just have to draw an invitation guest list, you can simply use online invitation portals to send out the e-invites through the screen of your smartphone device and you even end up saving paper, time and money.

Lastly, Publicize The Wedding News To The World Via Social Media

Those days are gone when newly married couples use to send wedding news through SMS on a random basis to friends, colleagues, and relatives. Nowadays, as soon as you are married or engaged, you can announce the news to the world through social media apps on your smartphone. Wait! A WORD OF CAUTION here: Brides should be very careful in sending those wedding updates. For a bride, announcing a wedding or engagement could end up alienating some of your single guy friends. After all, It’s the Internet

Have something to add to this story? Share it in the comments.