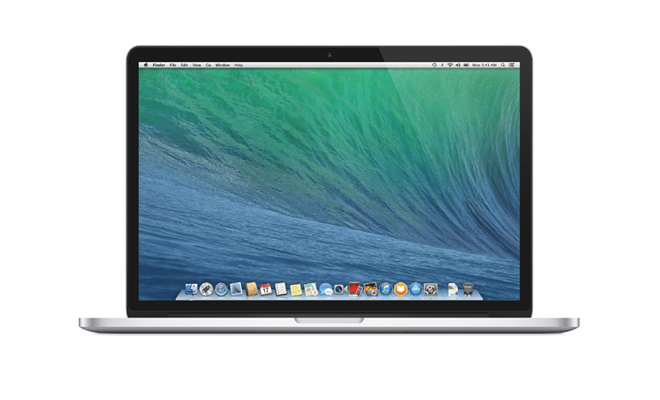 Let us have a look at how Apple is faring right now in the computer market. It is infact so good that it has decreased it’s product’s prices! (if you get the drift). According to a GeekBench 3 result for the entry-level 15-inch Retina MacBook Pro with Intel Core i7-4770HQ (2.2 GHz) processor, the new device is nearly 8 percent faster than the entry-level 2013 Retina MacBook Pro, powered by the Intel Core i7-4750HQ (2.0 GHz) CPU.

The 13-inch version of the Retina MacBook Pro which is priced in the region of 1300 US dollars is powered by a 2.6GHz dual-core Intel Core i5 processor, and it also features an 8GB RAM and 128GB of flash storage. However, the $1,499 model comes with the same specifications, except for an increased flash-storage capacity of 256GB for those who need the extra space. Another model which is priced around 1800 US dollars, on the other hand, sports a 2.8GHz dual-core Intel Core i5 processor, 8GB RAM and 512GB flash storage.

Coming to the 15-inch Retina MacBook Pro, this is also available in three different versions with the entry-level model starting at $1,999 which actually features a 2.2GHz quad-core Intel Core i7 coupled with a memory 16GB RAM and 256GB flash storage and Iris Graphics for visual performances. The high-end model, priced at $2,499, comes with a 2.5GHz quad-core Intel Core i7, 16GB RAM, 512GB flash storage and Nvidia GeForce GT 750m.

Long story Short, looks like Apple is trying to boost its MacBook sales more now that it has realized that perhaps it focused on its iPhone and iPad series a bit too long and is now trying to earn its revenue by doing what it does best and making what it makes best! Why else would they try to sell their MacBook series of laptops for a clear 200 US dollar discount? If you know your economics then this is done either when you want to establish a market or you want to boost sales to incur more profit at financially difficult times and am not exactly sure if the latter is the present scenario for Apple.

What’s surprising is that they’re offering now better models with better specs and configuration at a lower price.

Let us know your opinion on Apple focuses more on its MacBook series and subscribe to our newsletter to get insightful stories daily in your inbox.