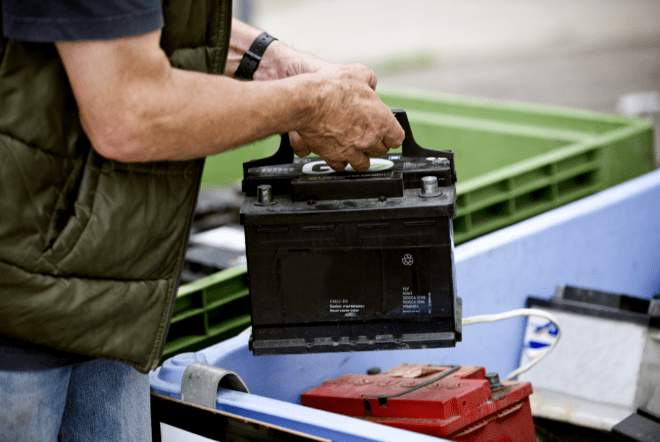 There are 19 different types of batteries. They’re made from different materials like lead for a car battery, nickel-cadmium for some small battery-operated tools, or lithium-ion for your phone and laptop.

Let’s check it out.

From the genius who brought us Microsoft, The Bill Gates Foundation is working new battery tech. They’ve come up with a battery that’s powered by none other than your own urine. It’s strong enough to power a smartphone.

Microorganisms in your urine react and break down within the battery to give it fuel. Researchers in West England even took this concept even further. They turned traditional urinals into electric powerhouses, fueling the grid.

Batteries from urine could be the ultimate prepper and survivalist tool of the future.

Similar to Lithium-Ion batteries, Sodium-Ion batteries run on salt. The two elements, lithium, and sodium are similar, and research on sodium-ion batteries has been going on since the 1970s. But when they’re lithium-ion brother got a foothold in the market, a lot of the interest faded.

Sodium-ion batteries aren’t as powerful as lithium-ion, but they’re a lot easier to get the materials to build it. They’re a lot more environmentally friendly too, which could lead to a surge in interest in the future.

Lithium-ion batteries like these products are traditionally the most powerful. They’re the longest-lasting and most reliable batteries that ever existed. But a new lithium battery could be even better.

Researchers at Monash University have been looking into future battery tech. They and came up with Lithium-Sulfer batteries. These batteries could charge a smartphone for 5 full days before it needs a recharge, or power an electric car for over 600 miles.

While lithium can be hard to get your hands on, cobalt in lithium-ion batteries is even worse and more expensive. So replacing the cobalt could lead to cheaper, more environmentally friendly batteries.

And fortunately, cobalt-free batteries could be coming to the market. A China-based company called SVOLT has been working on creating batteries without cobalt for electric cars.

The new batteries help a car drive further, up to 500 miles. They’re also safer, and more environmentally friendly. Right now these cobalt-free batteries are exclusively for the electric vehicle market. As research progresses, we could see these environmental choices available for other technologies too.

Many concepts behind future batteries look promising. But they can’t yet meet the standards demanded of today’s technology. So while we look to see how new battery tech may evolve so we can turn away from harsh lithium-ion mining practices, lithium-ion remains king.

We talk about the things that matter, like future technologies, your money, and your legal rights. So the next time you have a question, make sure you have us bookmarked.