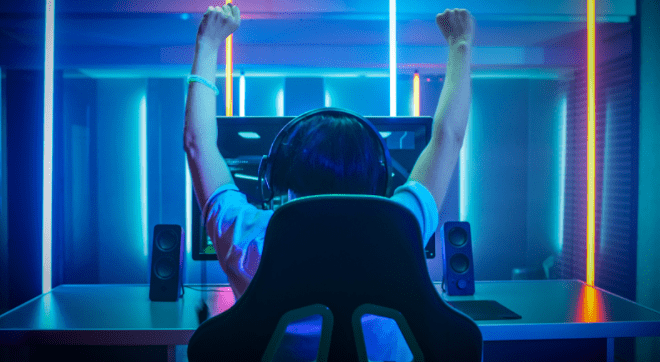 Out of the 2.2 billion gamers on this planet, 1.2 billion are PC gamers. Whether you’re already one of them or are only just starting to venture into this territory, it’s always a good idea to expand your games library.

But with so many titles out there, it’s basically impossible to try them all. Plus, some aren’t worth your time at all.

So how can you make sure you’re spending your PC gaming time in the best way possible? By reading on!

In this article, we’ll explore some of the best games for the computer so you can try them out and see for yourself how fantastic they are.

Minecraft is like playing with Legos, but on a computer. It’s also much more complicated.

This is a sandbox game created by Mojang Studios and it was first released in November of 2011. Now, almost a decade later, this game is still going strong.

In Minecraft, you get to play as Steve, a brown-haired man dressed in blue. In survival mode, you’ll have to do exactly that: survive.

During daytime, you’ll have the chance to gather materials and craft shelter, tools, and more. Monsters come out at night, so you have to adapt accordingly or risk dying.

While the things you can make in the beginning are pretty rudimentary, you can eventually craft pretty complicated things, including those powered by electricity. Eventually, you can even make it into the Nether, where there’s tons of lava and other ghastly creatures.

If you choose not to play in survival mode, there’s creative mode. Here, you don’t have to gather materials; they just appear when you need them. You also don’t have to worry about fighting against monsters, drowning in water, or suffering damage if you fall from somewhere up high.

Minecraft is already tons of fun on your own. But when you get online, that fun can be multiplied!

There are many servers where people come together to build entire civilizations. Some rental Minecraft hosting providers provide all-time customer service and maintenance. This can help create a sense of community; many people have made friends for life because of Minecraft servers!

There are also tougher servers where people create their own plots and fight over resources and rights to land. And there are also servers that run mods, so the sky’s the limit when it comes to your online Minecraft experience.

Because of all these possibilities, it’s no wonder this computer game is still going strong 10 years later. Plus, the devs keep coming out with exciting updates, which makes it fun for adults and kids alike. This makes Minecraft one of the best computer games for kids!

In each game, 2 teams of 5 champions duke it out to completely destroy the other’s base.

On the main maps, there are 3 lanes and the meta game dictates where each of the specialized roles goes. Each of the lanes has certain amount of turrets that eventually lead to the base. As you can see, it’s important to push down these turrets to gain access to the enemy’s base.

During the game, the team will make crucial decisions to push or go get buffs, which are enhancements rewarded to the player once they destroy some monsters. They can also buy items to further enhance their powers.

At the time of writing, there are over 150 champions, which means it takes some skill and time to learn each one.

In addition, there is also a mode called All Random All Mid (ARAM), which is like a quicker version of the real game. Instead of 5v5, it’s 3v3, and each player is given a random champion. There is only 1 lane straight down the middle, which makes games a lot more chaotic and faster.

Counter-Strike: Global Offensive (CS:GO) is also a game with a long history. While CS:GO has only just came out in August 2012, it’s the most recent game in the entire Counter-Strike (CS) series. The very first CS game came out in 1999, which means it’s been around for over 20 years!

CS:GO is a first-person shooter that’s based around terrorists (Ts) and counter-terrorists (CTs) trying to outplay one another. It’s made by Valve and Hidden Path Entertainment.

In most maps, you have these objectives: plant and detonate the bomb as Ts or successfully defuse a planted bomb as CTs. You can also win the round by killing all the players on the opposing team.

There is also another mode where it’s a hostage situation. Ts have to protect the hostages from the CTs and the CTs have to rescue the hostages and successfully bring them to a safe point.

Another mode is gun games, where you progress through each gun type by accumulating kills. At the end, whoever can get a kill with a knife wins the whole game.

What makes CS:GO a game of skill is the fact that all the guns have recoil and a particular spray pattern. The most skilled players will understand how each gun works and perfect their accuracy. In addition, good players will memorize each map and their callouts for better-coordinated efforts.

The fact that each game is never the same as another makes CS:GO highly addicting. Once you play it, you’ll see why it’s been so popular for over 2 decades.

In the last few years, battle royale games have become immensely popular, and it all pretty much started with Fortnite. This game only came out in 2017, but it’s one of Epic Games’ biggest hits ever.

Fortnite has a fun cartoony feel to it, which is why it draws both kids and adults into the game. While you start with default characters, you can earn various add-ons to make yours unique, such as backpacks, skins, emotes, pickaxe skins, and more.

In this game, you start off with 100 players who ride in on the battle bus. You then drop off at various times and scramble to grab guns, ammunition, and resources (wood, bricks, metal, potions, and more). These players duke it out to the end, where there’s only 1 player left.

There’s 1 caveat though: you don’t get free reign of the map. Every few minutes, the map keeps shrinking to predetermined rings. There are some games where the end circle is so small, players barely have any room to move in.

What keeps this game fresh is the devs keep coming out with new weapons and balancing existing ones. In addition, there’s a mysterious storyline that keeps players guessing at what’s coming next.

If you’d like to kick back and relax, then you’ll love Stardew Valley. It came out in February 2016 and was developed by Erice “ConcernedApe” Barone.

This game is an open-ended RPG where you tend to your player’s grandfather’s farm plot. Many people say it’s like a mix between Pokemon and Animal Crossing.

In Stardew Valley, there’s a storyline, but you’re free to progress at your own pace. If you enjoy farming, then you can simply just log on, tend to crops, fish, and go into the mines for resources.

While you can play Stardew Valley on your own, you can also create farms and work together with your friends. It’s the perfect game to play co-op on while shooting the breeze on Discord.

If these games have gotten you interested in computer gaming, then take a look at these deals to find a laptop that’s perfect for your gaming setup.

Try These Best Games for the Computer

Now that you’ve read our article, you have a great list when it comes to the best games for the computer. Whether you enjoy quiet and peaceful farming life or fast-paced first-person shooters, there’s something for everyone and every mood.

Of course, this is just the tip of the iceberg. There are so many wonderful titles out there just waiting for you to discover them!

So use our list as a starting point and grow your games library from there. You never know when you’ll stumble upon your next favorite game if you don’t give it a try!

If you felt like this article on the best games for the computer was helpful, then check out the rest of our blog for other useful articles!

The Most Popular eSports Games Today