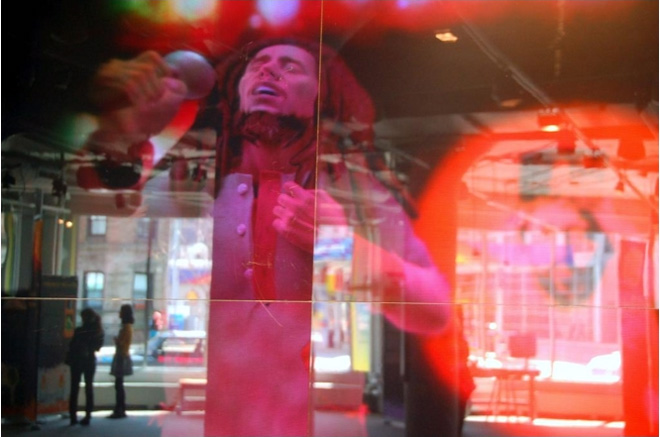 As if bringing holographic technology into the mainstream back in 2014 wasn’t enough; see what these pioneers have in mind for 2016.

The evolution of motion capture 3D holograms has finally leaped out of Ray Bradbury’s fictional “Holodeck” (think Star Trek: The Next Generation, back before Picard became Xavier) –and onto trade show floors in recent years. And there’s no going back to the boring status quo.

An Evolution of 3D Display Technology: You Can Now Hug a Hologram

Once upon a time, bringing a dead celebrity back to life with the Almighty hologram was a big deal, but today 3D holographic displays are being used at trade shows aimed at improving health.

At a recent trade show event in Portugal aimed at the medical community serving those with diabetes, a new flavour of 3D holographic technology was used to wow and impress show attendees; a diabetes exhibition using motion capture system that was able to interact with onlookers in real-time.

Using humour as the sugar to help their message go down, trade show booth visitors were able to interact with a few colourful characters and discuss research, poke a little fun, and even give each other a hug. Except these characters were almost entirely fictional.

Using motion capture 3D holograms from activ8hologramevents.com, a vendor was able to harness the technology to make a great stand –both figuratively and literally.

Needless to say the display was a hit and many interactions went viral on the web, bringing additional focus and interest to the vendor using the technology. And clearly it worked, because here we are writing about it.

Not Your Grandpa’s Holograms

But that isn’t the only trick in Activ8 Holographic Events’ repertoire. Just over a year ago the company brought 3D holographic display into the mainstream with a completely 3D, real-time, DJ-controlled 90-degree projection at a UK night club.

Entitled “Lost in Wonderland”, Activ8 Holographic Events was able to add to the club experience in a way unprecedented on UK soil with a solid, creative display for party-goers.

In what felt like a mash-up between Disney’s Fantasia and Disney’s Alice in Wonderland, party revellers were able to see a fictional world before their very eyes, combined with real-time computer generated images which were set to the beat of the music played by the DJs.

The results were out of this world, literally, as it seemed that quite literally a portal had opened up in full view of everyone at the venue.

This event too went viral, with word of mouth spreading far and wide over social media. The event helped to further solidify Activ8 Holographic Events as a true 3D entertainment mainstay.

Akin to the old “Video Dance Parties” I grew up with, it seems that 3D holographic display is here to stay –and without bulky, silly looking headsets.

If the old video dance parties of yesteryear are any indication, it looks like holograms are set to become as ubiquitous as the video projector at private and public functions.

Just as the evolution progressed from record to “Video Killed the Radio Star”, I think it’s entirely safe to say that 3D holographic display is all set to destroy even the most contemporary flat-screen HD video technology in the not-too-distant-future –or in a “galaxy far, far away”.