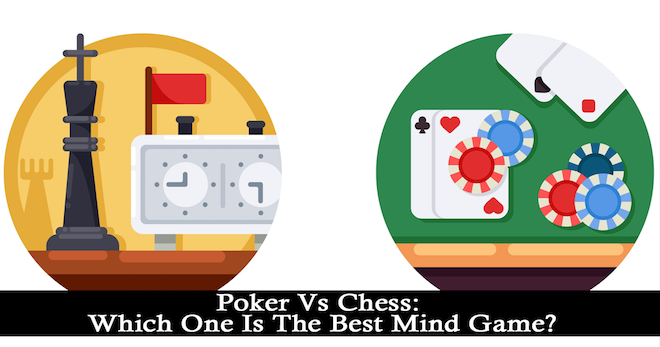 The long-heated debate of which is the best mind game between Poker and Chess has been discussed comprehensively over the years. Mostly so, because both of the games require a good deal of critical thinking, calculations, and strategies. Poker rules are easy to learn as compared to Chess, however, both these games have their own complexities and to reach a concrete conclusion, one must weigh out both sides. To do so, we will take a look at the common elements of the game and note the levels at which they are played:

The number of opponents in a game determines a great deal about one’s victory in it. When we talk about Chess, you just have one opponent to play against, which eases up the complexity level in comparison to Poker. In contrast, Poker can be played against several opponents. A Poker player has to monitor the behavior of all his opponents in order to predict the strength of their hand and their next move.

Both Chess and Poker are games of pure skills. While Poker is more about calculations, Chess requires memorization. The most common skill both these games require is strategic analysis. You need to analyze your opponent well in order to decide your plan of action. As a Chess player, you have to analyze just one person, that makes it easy for you to study his every single move meticulously. Whereas when you play Poker, you won’t be able to go in-depth considering there are 4-5 opponents to watch out for at the table.

Chess and Poker, both are strategy games. In the game of Chess, all the information you need is out there on the board. It is essentially (and literally!) all black and white as compared to Poker which has a lot of grey area. Poker is all about incomplete information, where the player has to put together the pieces as and when he advances. It is up to the player as to how he will obtain information and use it for his benefit. So, the decision-making ability of a player is tested more in Poker when compared to Chess.

In conclusion, both, Chess and Poker have their particular intricacies. They call for immense practice and tactics to excel in them. Whereas Chess is about intellect, Poker focuses more on social acumen. Therefore, both these mind games are great in their respective areas which have different requirements that are almost on the same level as the other. With that being said, it is vital to add that Poker is more tactical and requires the player to be more vigilant throughout.