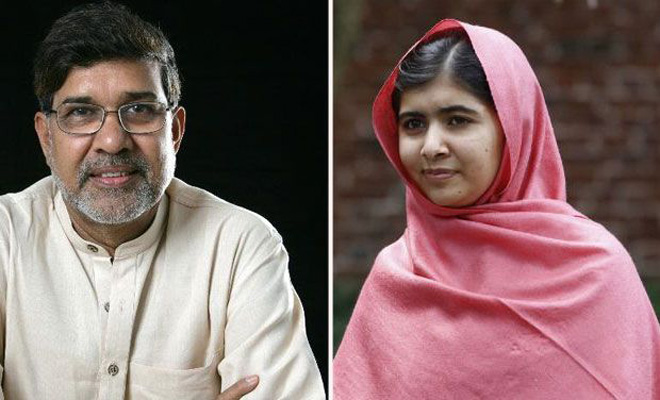 Here is the latest report that two people are sharing the nobel peace prize that has been announced today by Norwegian Nobel Committee and as per their disclosure, this award has been shared by two people from Indo-Pak nationality, one is Kailash Satyarthi, India’s children rights activist and other one is Malala Yousafzai, a 17-year old girl, education activist and victim of taliban’s attack.

On this, Chairman Chairman of the Norwegian Nobel Committee, Thorbjoern Jagland said “Children must go to school, not be financially exploited. In the poor countries of the world, 60% of the present population is under 25 years of age. It is a prerequisite for peaceful global development that the rights of children and young people be respected. In conflict-ridden areas in particular, the violation of children leads to the continuation of violence from generation to generation.”

Now after this honor, Malala has now become a youngest holder of nobel prize winner. Earlier, this record was held by Australian-born british scientist Lawrence Bragg, who was 25 when he won the nobel prize for his contribution in Physics in 1915.

On the other side, Kailash has won the same title for his contribution in children rights in India Satyarthi campaigned worldwide on social issues involving children. In 1980 he became secretary general for Bonded Labour Liberation Front / Bachpan Bachao Andolan. He has also been involved with the Global March Against Child Labor and its international advocacy body, the International Center on Child Labor and Education (ICCLE), which are worldwide coalitions of NGOs, teachers and trades unionists, and also the Global Campaign for Education.

Let us know your opinion on “Malala And Kailash Won Nobel Peace Prize” and subscribe to our newsletter to get insightful stories daily in your inbox.