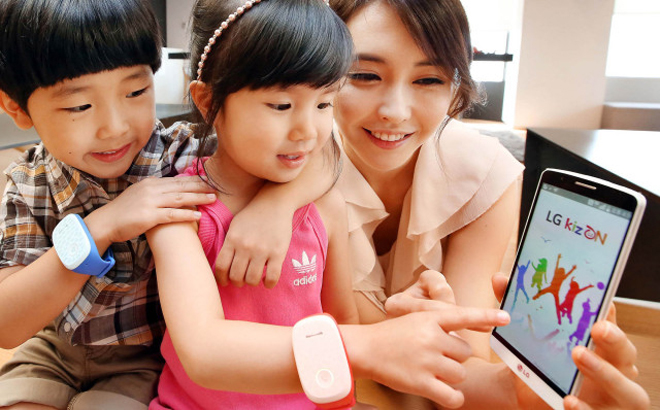 As we all know that LG has announced its android based wearable “G Watch” worldwide in a recent release and not it seems that company do not wanted to stop here at this point of time as wearable market has really high temperature and many big companies are already engaged in production of high-tech wearables.

In past one year, wearable industry is fully evolved as few years back, for people wearable was fitbit and jawbone but now many big mobile makers such as Sony, Samsung, Motorola has their own wearable products and in future Microsoft and Apple too will have their own stuffs.

So LG do not want to mark full stop to its wearable productivity so that’s why company announced a wearable watch called “KizON” and this device is ideally made for pre-school and primary school kids and their parents.

And the main highlight of this device is its functionality with GPS and WiFi as this device allows parents to get real-time location information and track the location of their children on a smartphone or tablet.

This KizON watch also has a “One Step Direct Call” button, which allows parents to contact their children in an easy way and even a child can dial a pre-configured phone number, which can be changed at any point of time via smartphone or tablet running Android 4.1 or higher version.

In a case, a child fails to answer a call from any pre-set phone numbers within 10 seconds, KizON will automatically connect the call to let the parents listen through the built-in microphone.

Another vital feature fo KizON is “Location Reminder” that provides adults the ability to pre-set the device to provide location alerts at specific times throughout the day.

Apart from its functionality, If we’re talking about the specifications of this device so it has a 400 mAh battery last for 36 hours on a full charge and if battery falls below 25 percent then parents will be notified via their smartphones.

This wearable is made of eco-friendly Polythiourethane (PTU) material that is water-resistant as well as stain-resistant.

In addition to this, it comes in three colors which includes blue, pink and green. And it will be publicly announced in South Korea on July 10 before its acquaintance in North American and Europe in the third quarter of this year.

Company will provide more details regarding availability and price of this device later.

Let us know your opinion on LG KizON, A Wearable For Kids and Parents in comment box below and subscribe to our newsletter to get insightful stories daily in your inbox.