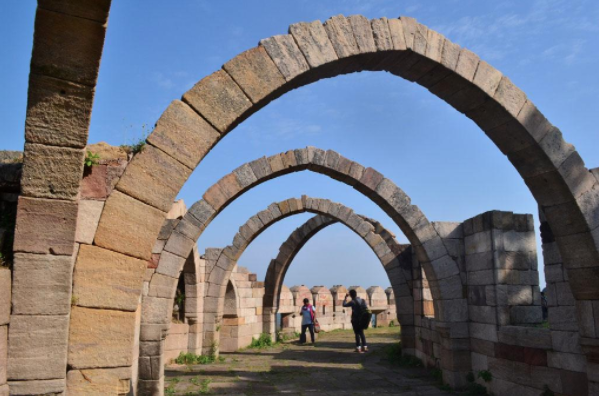 Baroda, now known as Vadodara is a city in Gujarat with a history dating back to the 9th century when it was known as Ankottaka. It was a famous Jainism center during the 5th and 6th century AD before Dor tribes of Rajputs captured it. Baroda changed hands among several Hindu rulers and Mughals until Maratha General Pilaji Rao Gaekwad carved it out from the Mughals. Vadodara is also known as Sayaji Nagari named so after its famed ruler Maharaja Sayajirao Gaekwad III who brought about several reforms that transformed this city. History of any city is depicted by the monuments built by its rulers, and Baroda is no different.

Laxmi Vilas Palace represents the private residence of Maharaja Sayajirao Gaekwad, the erstwhile King of Baroda. This palace is considered the largest among similar private dwellings with a size that is about four times that of the Buckingham Palace. Sitting on a sprawling 500 acres, this magnificent palace continues to be the residence of the Gaekwads, the royal family of Baroda.  The palace compound houses several buildings such as Maharaja Fateh Singh Museum, LVP Banquets & Conventions, and Moti Baug Palace. The lush gardens further enhance the beauty of the palace.

During its heyday, the palace was also home to a small zoo, but today all that remains of the zoo are only a few crocodiles and a small pond. This palace is said to have taken as much as 12 years to be completed and cost a princely sum of £180,000. Today, the palace also houses offices of Baroda Cricket Association, a teak floor tennis court, and a private golf course. The renowned Baroda Museum and Picture Gallery are among the two museums housed in Sayaji Baug which is another landmark of Baroda. This museum was built in 1894 and is among a series of buildings commissioned by the erstwhile ruler Sayajirao. Most of these structures were designed by Mant & Chislom. The collections seen at the museum or most of it were handpicked by the late ruler who traveled widely and commissioned several scholars for the task.

A wide range of collectibles ranging from sculptures to Mughal miniatures, objects, and textiles from Japan as well as artifacts representing Natural History, Earth Sciences, and Zoology were identified to be housed in the museum. A skeleton of the 22-meter long blue whale that was found at River Mahi’s mouth in 1972 is among the highlights at the museum. The Picture Gallery comprises mostly of the private collection of Sayajirao and the ones created by the European masters. Two wings at the gallery are also dedicated to modern paintings. You can comfortably reach Baroda museum by taking a direct Ahmedabad to Baroda one-way cab at comparatively lesser prices than hiring usual cabs with return fares.

The history of Champaner and Pavagadh dates back to the 8th century when it was ruled by Vanraj Chavda of the Chavda dynasty. According to legends, it was the intense desire of the king to immortalize his best friend and minister, Champa, got Champaner its present name.  However, there is another anecdote that points to the igneous rocks found in Pavagadh with its red-tinged yellow color that gave the appearance of a flower known as ‘Champaka.’

By the time the British gained control over the region in the early 19th century, the city had nearly been consumed by wilderness with the population dipping to just about 500 people.  Later, a nine-year-long study conducted by the Sayajirao University in Baroda about the identity and history of this glorious city in its prime day unearthed many artifacts, inscriptions, and other treasures. Today, the Champaner-Pavagadh archaeological park is UNESCO world heritage site.

Pavagadh represents a hill temple about 3 km from Champaner with a 5 km trek on foot through the jungles. A cable car is also available that will take the tourists to the top of the hill. It is believed that Pavagadh hills are a part of the Himalayas that was being carried by Hanuman to Lanka. There are Hindu and Jain temples atop the hill. Ahmedabad to Baroda cabs services will ensure a hassle-free experience when exploring these glorious ruins of the bygone era.