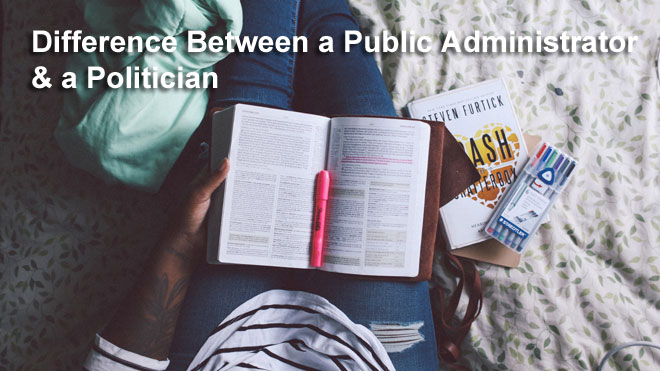 What Do Public Administrators Do?

Public administrators work to implement government policy. They also study public policy in an academic setting to help prepare the next wave of public servants for their careers. Public administrators can be considered anyone in a high-ranking position who isn’t elected. This includes but is not limited to city managers, human resources administrators and mental health directors. This also includes many of the federal agencies you’re familiar with: the Department of Education, Environmental Protection Agency, Department of Agriculture and Department of the Treasury are all public administration institutions, and the head of each respective agency is appointed by the President.

A practical definition of public administration would be that it is the act of transforming politics into actions that impact people in their daily lives. Public administrators play a role in determining whether or not roads get built or maintenance projects are undertaken. They play a role in deciding where a city or state’s budget is allocated based on what they believe to be the greatest need with the most potential payoff once it is addressed. The easiest way to think of the difference: politicians provide the “what”, public administrators provide the “how”.

The role of public administration is as old as government itself, but it wasn’t until the 19th century that public administration became what it is today. Public administrators used to connect rulers with people because they had the skills to do so; they could read and write during times when few were literate. The advent of democracy and widespread literacy necessitated a change in the job description of public administrators and the methods by which they operated. This found its genesis in Prussian universities as academics strove toward social reform. Their influence spread, and as public administration wove itself into the fabric of democracy, social programs were born out of the intention to give equality of opportunity to all who desired to lift themselves out of poverty. These types of actions largely define the job today, but they still retain their role of interacting with politicians in a more direct manner than most of the citizenry.

Public administrators are well versed in various sociological and mathematical theories concerning human behavior and how to make society function as efficiently as possible without incurring too many losses in the realms of fulfillment and quality of life. Social engineering is therefore an inherent part of the job, and the idea is to account for the aspects of human nature that cannot be changed while capitalizing on learned and innate tendencies for the betterment of society.

The Power Behind the Throne

Some public administrators have more influence than some politicians do. Those who rise to the top within this field can make six figure salaries, and their suggestions are taken very seriously by their superiors. They don’t get the glory when something works, but they also bear less of the responsibility when something goes wrong, and that makes this a perfect field for someone who wants to make a difference but doesn’t want the stress that comes with being a policymaker.

Connie Lyons is an avid blogger focused on social issues and the role of government. If you’re in the public admin field or interested in a career in public service, you may consider a public admin degree such as that offered by University of Southern California.