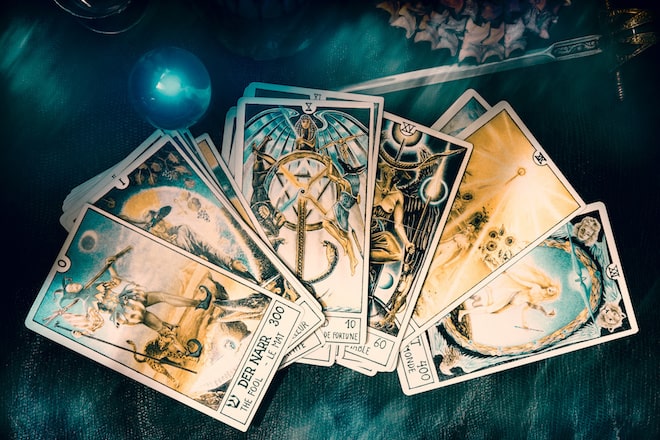 Even if you’ve never had a reading, you’ve probably at least heard of tarot cards. It’s one of the most popular divine practices on Earth, said to be able to give you glimpses into the future and shape your fate. Whether you believe it or not, tarot is a fun and fascinating practice with a rich history including ancient Egyptian ties and lots of speculation.

Read on for a brief history of tarot.

The History of Tarot: A Brief Summary

Tarot cards haven’t always been used for divination. They were actually made to be used in a game called tarot, or tarocco, during the fourteenth century. Their use in divination didn’t come for a few centuries after this.

Tarot cards came from “trump cards”, which were hand-painted cards added to regular decks for only the most wealthy people. These wealthy Europeans would hire famous painters of the time to design the cards. The Visconti family is one of the most prominent families who had cards custom made for them, but many other rich families took part.

The cards began to be used for divination around the sixteenth and seventeenth centuries, only with far fewer rules than today. In the late seventeenth century French Freemason Antoine Court de Gebelin published a book that gave a deep analysis of Tarot. He claimed that its symbolism came from Egyptian priests and its occult knowledge was passed down to the Romans, the Catholic Churches, and the popes, all of who wanted to keep the tarot’s power a secret.

Most of this history was simply made up, but people bought it. The first tarot deck made specifically for divination was created in 1702 by occultist Jean-Baptiste Alliette, who further helped explain how to unlock the secrets of the tarot.

It wasn’t long before tarot became a popular pastime among the wealthiest Europeans, and with tarot came other occult activities like seances and tea-leaf reading. Cartomancy, the use of cards for divine purposes, only exploded from this point on.

Occultist Jean-Baptiste Alliette stepped in in 1785 to expand on the lore of tarot. He came up with the link between tarot and astrology, the four humors, and the four elements (earth, water, fire, and air) — something that has stuck with tarot ever since. Alliette created the first tarot deck specifically for divine reading.

Alliette came up with official rules for using Tarot for divination, a book called the Dictionnaire synonimique du Livre de Thot filled with the meanings of all cards, and started a society for tarot users. His history of tarot went deep. He claimed it told of the creation of the world, and that the first deck was printed on gold leaves.

Some accused Alliette of trying to capitalize on what Gebelin made popular, including Michael Dummett in his book The Game of Tarot. However, history shows that Alliette was into tarot first, effectively destroying those accusations.

One of the most widely known tarot decks is the Rider-Waite tarot deck, made by British occultist Arthur Waite. The art style used in this deck is frequently used as inspiration for modern decks, as well as many of the Kabbalistic imagery and symbolism. If you’re into Tarot at all, you’ve probably seen Waite’s deck before.

Waite created the deck with artist Pamela Colman Smith, and it was first released in 1909. Smith chose to use characters and further imagery in the cards as opposed to earlier tarot decks which were just covered in cups, coins, swords or wands, a carry-over from Trump cards. Now, these images are a staple of almost every Tarot deck, no matter what the design.

French deacon Éliphas Lévi also had his interpretation of tarot. He agreed to the Egyptian origins of the cards but thought the interpretations were all off. Lévi believed that the tarot was all one needed to gain universal knowledge and enlightenment, as long as they knew how to use it.

Lévi made changes to tarot that have stuck to this day, including linking each suit to one of the ten sefiroth, making an association between the Hebrew alphabet and the cards, and claiming that court cards represent the stages of life. He is looked back on as one of the most important theorists in tarot’s history. In the 1880s his work was highly appreciated among french occultists including Papus, one of the founding members of the Kabbalistic Order of the Rose Cross.

In the 1940s Aleister Crowley, a famous occultist and poet (among other things), created the Thoth Tarot deck with the help of Lady Frieda harris, which remains one of the most used decks today. It came with a book that described Crowley’s take on the history of Tarot and how the cards can be used divinely.

Crowley’s deck changes the names of some of the cards in the Rider-Waite deck, like changing The Magician to The Magus, Strength to Lust, and The World to The Universe. The Thoth deck directly links the magic of the cards to ancient Egypt, specifically the Book of Thoth, essentially the Egyptian Bible.

Tarot cards have been used for a long time, but there was a significant revival in their use starting in the 60s. This was thanks partially to hippies, some of who had an interest in the occult and the mystery behind the cards. Their popularity carried through the decade into the 70s, even prompting Salvador Dali to create his own deck!

Tarot is now extremely popular in Japan. New decks featuring original designs are printed regularly, and you can even get your tarot read in some department stores. This just goes to show the staying power of the mystical tarot.

Divine or not, tarot is a practice that’s here to stay. The history of tarot has been studied for centuries and only increases in popularity as it is further interpreted and enjoyed. If you’ve never had your tarot cards read, it’s an experience that could help turn you into a believer.