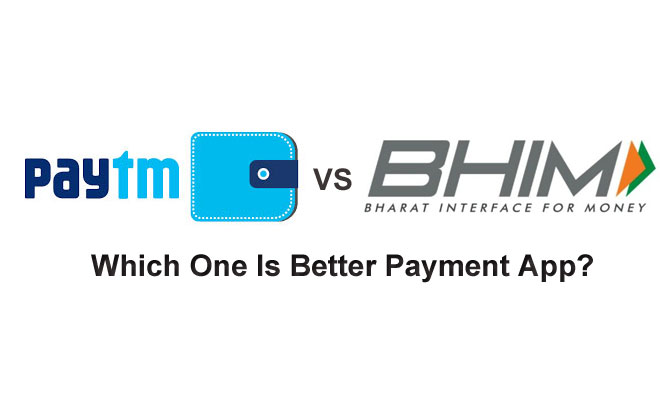 Since the launch of BHIM (Bharat Interface For Money), the app has become widely used UPI app. As far as the user volume is concerned, the app has managed to surpass other UPI apps and mobile wallets such as Paytm, Mobikwik.

On the other side, we are totally aware of the app named Paytm. The app has shown a tremendous growth in its user base since demonetization took place in India.

While BHIM is easily accessible, Paytm is mostly used e-wallet app across the country. Both the apps have their merits and demerits, but here I’ll compare both on various parameters and will find out which is a batter payment app for Indian mobile users.

BHIM app has gained popularity over the weeks because of its easy interface. The developers of BHIM have adopted minimal interface element for this app. The home screen of the app has three blue tiles for different options (send/request/scan & pay) on a white background. All the features of the app can easily be accessed from its home screen.

Paytm has a beautiful interface but you have to dig around to find the option. Also, it will take some time for you to get used to its interface. Though the app has too many options, the developers have managed to keep the icons of options in more organized manner.

Paytm on the other hand, uses gateways (they have their own security mechanism) for all the transactions between Paytm and banks. It’s security mainly relies on your phone’s lock that indicates balance in your Paytm wallet is not safe. Paytm does not ask for any PIN or password when you pay using your wallet balance that means anyone can make payments using Paytm balance. Hence, Paytm is not as reliable as BHIM app on the security factor.

BHIM is not an e-wallet app. NPCI projected BHIM app as a simple, secure and fast UPI app. In simple words, it is an easier route to access your bank account to make payments, transfer and receive money. Unlike conventional e-wallet apps, here don’t need to add money to make a transaction. Here you can read full guide on How To Use BHIM App In Easy Steps. The app also works on feature phones, without internet connectivity where you need to dial *99# from any mobile phone and follow the instructions.

Paytm app has a variety of services such as bill payments, DTH recharge, Mobile recharge, etc. that results in slow speed. Also to use Paytm, you need to add money to the wallet each time it runs out of money. In short, all the features and options of the app are a bit confusing to the first-time user or someone who never used a smartphone before.

The main reason behind using Digital Payments is for the ease, facility, and security. The BHIM app scores well in all these aspects and Paytm loses here. As far as security is concerned, Paytm is not as reliable as BHIM, though the Paytm has provided the security for its Pay and Passbook options, it mostly relies on your phone’s security. Again on the speed and usability quotient, Paytm is slower than its rival.

If I’ve to pick one app as a winning candidate, BHIM app has all the ingredients of a fast and reliable payment app for Indian users. But that doesn’t mean Paytm is not a useful app as it gives the recharges and bill payment facility which is not available in BHIM that makes Paytm useful for many people.